At some point in life and perhaps more during difficult times, we all wonder if there is an object that we can just pick up, which will change our luck for the better, right all wrongs and make all our problems disappear.

Well, there are and we aren't talking fairy tales. PowerFortunes.com is a leading astrology website, run by experts in the areas of astrology, the tarot and lucky talismans and amulets. This is our page about good luck charms and we are here to answer just such questions.

It may not be possible to effectively explain the complex relationship between luck, fate and human life, on a single webpage, but the PowerFortunes.com website has useful information pertaining to the different aspects. We encourage you to follow the links and delve deeper, you will discover much valuable information, as well as many interesting online services and features.

Let's start at the beginning, a good luck charm may be defined as,
"An object, which upon possession delivers a positive influence to the fortunes of a person, or set of persons."

As an astrology website, we often get enquiries from people who want to know which lucky charm, sign or symbol can help them win the lottery, or win at gambling and other games of chance. It is possible to make such a recommendation and the details of how this can be done are explained in link given above. But, do good luck charms actually work? In a word - yes. However, the question one should really ask is:

How can I find My Good Luck Charm?

The answer to this question is not quite so simple, as one must have a clearer understanding of the nature of the charm in question and how one wants that charm to work.
OBJECT..................ENERGY LEVEL 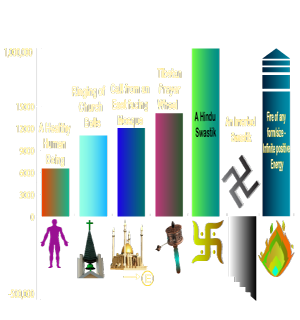 Certain objects have the ability to emit positive or negative spiritual energy, depending on their nature. The 'Lecher' and 'Lobe' antennae are simple scientific devices, which can be used to measure subtle amounts of energy emitted from living organisms and inanimate objects. Experiments using these antennae, connected to a 'Biometer', measuring energy in 'Bovine' unit's, were conducted to find the energy generated by certain religious objects and symbols of good fortune.
The findings are shown above.
⌧
Advertisement

Once a user recognises the latent positive spiritual energy of a lucky object, they allow that object to realise it's potential to do good. A good luck charm, based on positive energy may not necessarily completely alter your destiny, but this will diminish the negative effects of bad periods and help you to better exploit the benefit of good times.

Of course, in order to take full advantage of a good period, a proactive approach is required, as even in the ancient Hindu scriptures it is said that everything, inlcuding fate, is subservient to one's actions. But then again, acquiring an object that will bring you good luck, is also an action!

Are there any free, good luck charms? If you're looking for genuine products that astrologers give away absolutely free of charge, keep looking and let us know when you find one, because let's face it, astrologers have got to eat breakfast too. All jokes apart, we do have free offers on PowerFortunes.com and you can view them here. In addition to availing these offers, you can replicate the symbols of any of the objects shown below and further enhance their power through a simple energising process, such the one give on Page 2.

Something else that we offer for free on PowerFortunes.com is, the FREE professional advice of our astrologers regarding which amulets/talismans or combination of, will be the most beneficial for you, according to the specific details of your horoscope.

What are Popular Charms for Good Fortune in 2020?

What are those time tested, luck drawing objects that people around the world use as effective sources of good luck? Below is a list of some, 'Not so common' good luck charms that can be procured at little or no cost. These examples do not have any connection with black magic or sorcery and hence, can have no adverse effects:

Perhaps the most well known and universally recognised symbol of good fortune. A common question about horseshoes is, "Should a horseshoe be placed up or down?" There are conflicting views, but for the best results, placing an upright, used horseshoe at the top right corner of your front door-frame is considered to be an invitation to good luck to enter your home. That is, the open end of the horseshoe should be placed upwards. Similarly, placing a used horseshoe in a North facing, upright position inside a building brings good fortune and increases the ambient positive spiritual energy in the building. According to Vedic Astrology, a horseshoe worn by a black horse protects against the malefic effects of Saturn or 'Shani Dev'. 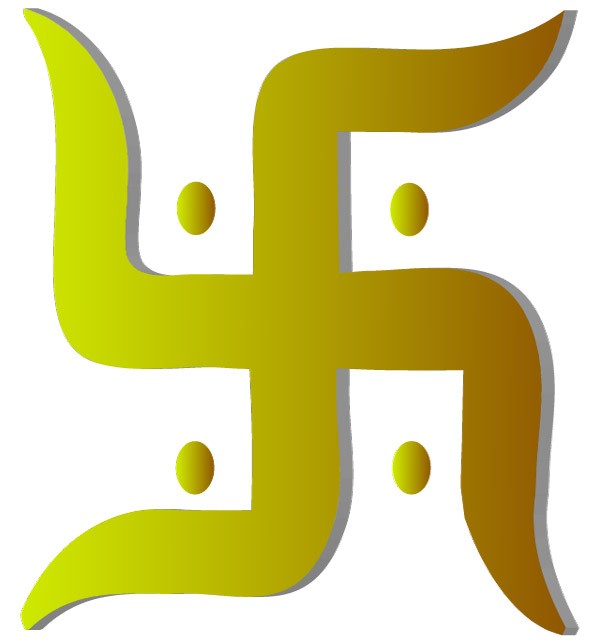 This sign represents the Hindu Lord of good fortune, 'Ganesh'. 'Swastik' is a Sanskrit word that means, 'Purveyor of Good Fortune', it bestows luck and prosperity, but it must always be placed in a clock-wise direction. This symbol of luck should not be confused with the 'Nazi Swastika', which was referred to in German as the 'Hakenkreuz'. This symbol is placed at an angle and does not produce any positive energy. Surpisingly, as this short YouTube video explains, the 'Swastik' finds a place in many cultures, both modern and ancient and is also considered to be a sacred symbol in religions other than Hinduism. You can find FREE Swastik Lockets on PowerFortunes.com! 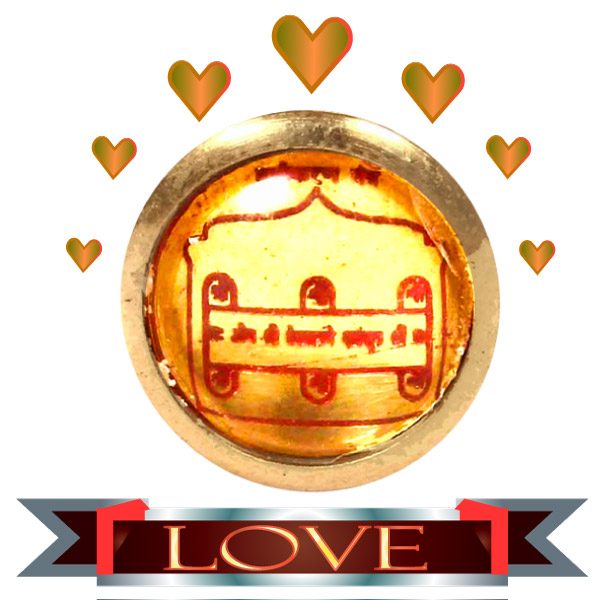 The Vashikaran talisman, shown here increases one's powers of influence (attraction) and is a powerful love talisman, but this is not limited attracting of members of the opposite gender and is used to improve other types of relationships by giving the wearer greater powers of influence.

Do You Feel Lucky? Well Do You?

Move the slider. If there's a link to your response, click on it. ▼ 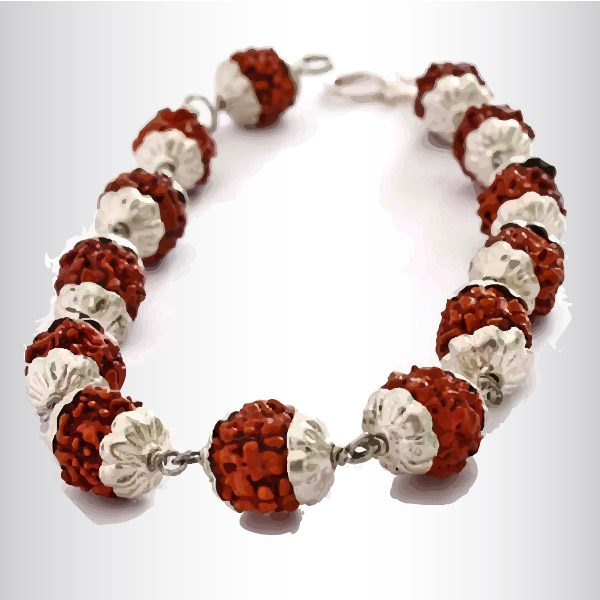 Very much in vogue nowadays, these are fashion accessories that serve a useful purpose. Lucky charm bracelets are very similar to lucky charm lockets, but offer greater physical contact. This can be of advantage if the material of the bracelet has therapeutic benefits, such as the rudraksh bracelet show in the figure, which also helps to regulate blood pressure. 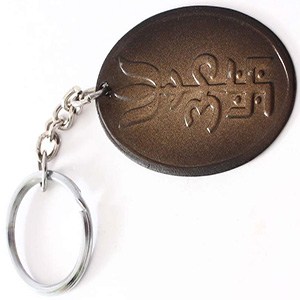 Most of us probably spend more time travelling in our cars than we spend in our homes. Now there probably isn't a good luck charm that can help you cruise through traffic jams or turn all the traffic lights green as you approach, but there are charms that can bring you protection from accidents and mishaps. The 'Maruti Yantra' is a one such amulet, this represents lord 'Hanuman', the monkey God and son of 'Vayu', the deity who rules the atmosphere. According to Hindu mythology, 'Hanuman' possesses great physical strength, enough to move mountains. In the 'Mahabharat', a legend about an epic battle between good and evil, 'Hanuman' adorned a flag placed on the chariot of the heroic, 'Arjun'. As a result, Arjun's chariot remained unscathed at the end of the battle. We can today benefit from Hanuman protective power by carrying a keyring to which a 'Maruti' amulet is attached. 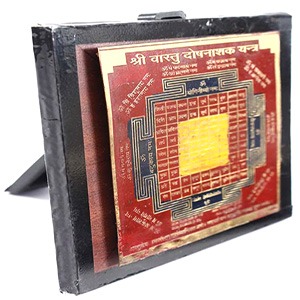 Any appropriate good luck charm can be placed in your house and this will bring about a positive influence, but there are certain fixed amulets, such as the 'Vastu Dosh Nivaran' amulet that specifically aim to increase the ambient positive energy levels, of a given location. Essentially, positive and negative energies enter a space from eight different directions and through different forms of conventional energy, you can find out more about this on our page about 'Vastu Shastra'. Ideally, we would want our living and work spaces to allow unrestricted access to positive influences and block the negative ones. However in practice, this is not always possible, or even feasible. Hence, installing amulets such as the 'Vastu Dosh Nivaran' or 'Sukh Samriddhi' will overcome unwanted influences and restore the balance of energy in favour of the favourable influences. In fact, amulets of this nature are often presented as house warming gifts.

⚠ Didn't find the answers you're looking for?